In a constantly changing market where users’ needs are constantly evolving, it was important for Hafslund Nett to develop a new app to meet these needs and to make communication with their customers easier. They wanted to make it easier for their customers to get an overview of their power consumption, power outages in the vicinity, meter reading and invoice overview.

Hafslund Nett owns and operates the regional power grid in Akershus, Oslo and Østfold. This covers 40 municipalities with a population of 1.5 million.

Bouvet got the assignment to develop the app with Sesam datahub used to deliver the data. The app would need data from 5 different sources. The data would have to be linked and transformed to be able to show data from various sources.

During the start of project user tests were carried out to verify the choice of functionality and design with the target groups. In addition, a test was conducted against WCAG 2.0 (Web Content Accessibility Guidelines) to ensure that the app can be used by as many as possible.

By using Google’s Firebase and Realtime database, this provided an opportunity to keep the data synchronised with the backend. To handle some logic at the server level, Firebase Cloud Functions was used.

Parallel to developing the app, work was commenced on the data to be used in the app. The data was received mainly from Sesam datahub, which synchronised the data directly into the Firebase Realtime Database.

Hafslund Nett already had great control over their data. They were using Sesam as a central Datahub for controlling the flow of data between systems. It provided a self-service for datasets for new projects to make use of. Rather than having to go to the source system, a new project can consume the data from the Sesam Datahub, transform it and push it to target system, Firebase in this case.

What was not provided by Sesam was handled by Cloud Functions which aggregated and managed the data so that the app could easily use it.

Firebase also handled authentication through passwords on SMS. Thus, existing Hafslund Nett customers could easily log in. The app was written in Kotlin and Swift 3.

At the end when app was deployed Hafslund Nett has an app that offers customers data from different sources, connected and available in one place.

Now Hafslund Nett’s customers can get all data from 5 different sources straight to their phones being able to check their power consumption, power outages in the vicinity, meter reading and invoice and payment overview. 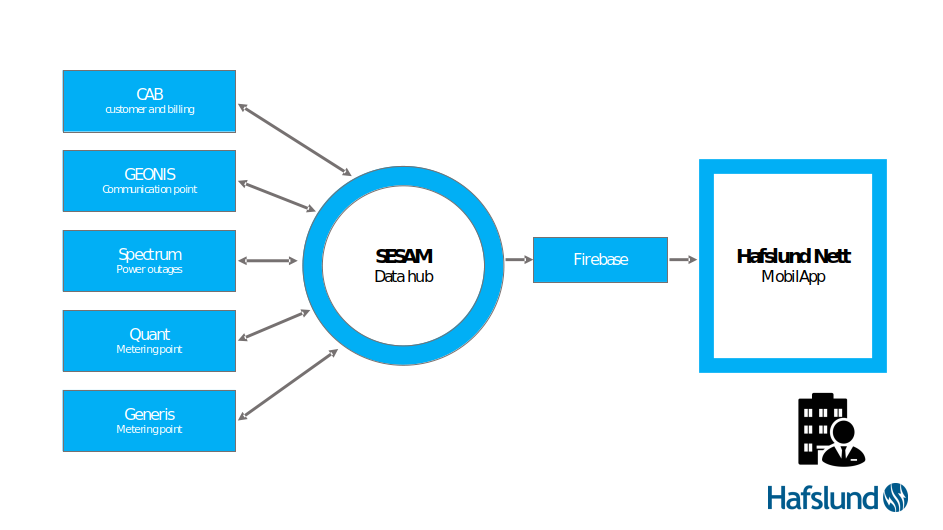